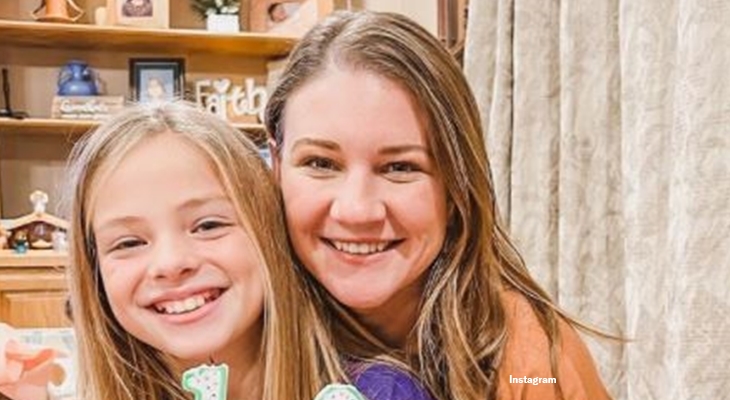 OutDaughtered fans know that Danielle Busby loves the Christmas holidays. She’s always quick to jump into the festivities feet-first. Now, she shared a photo that revealed just herself and Adam decked out in a Christmas theme. Fans absolutely loved the photograph.  Actually, it certainly seems like an ideal feel-good photo for the season.

OutDaughtered Family Gets Into The Spirit Of The season

This weekend, Danielle told her fans that the family enjoyed the League City Christmas parade. They always try and make it, although it was canceled last year. However, the year before that, the whole family appeared as guest celebrities. This year it looked like the Busby family joined the other Texans as they watched floats. Adam liked it as he had an opportunity to decorate his new truck and they all went along in it.

OutDaughtered fans were tantalized recently, by a post that Danielle shared about a secret. Some fans thought that perhaps she meant that a new season of the TLC show comes along. Especially when they saw that Adam shared a post about Hazel and a large camera. However it might have been that they held a special fashion show for Graeson Bee, their clothing line, After the show, the whole family danced a lot, and clearly, it was also something of a Christmas celebration.

OutDaughtered – Danielle Shares A Christmas Photo of Her & Adam

On December 6, Danielle took to her Instagram and posted up a photo of herself with Adam. In her caption, she wrote, “We remembered to take a pic of just us this year 🥰 and lucky us…it ‘snowed’ ❄️🤣 Thanks to @thevaughnteamtx for the cute setup 📷♥️#christmaspictures #itsabuzzworld.” Although it was a staged photo, fans thought it looked really nice and a lot of them commented about it. 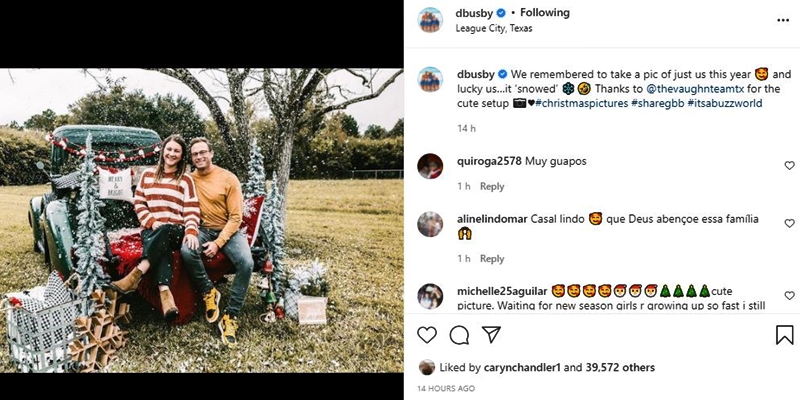 Plenty of OutDaughtered fans commented on the photo and here’s a sample of what some of them said about it:

🥰🥰🥰🥰🎅🎅🎅🎄🎄🎄🎄cute picture. Waiting for new season girls r growing up so fast i still remember when they were all babies. 🥰

Great picture love you guys and your family!😍

Nothing like a Texas Christmas 🎄 ❤️ love the pic.

Love it, if you had the girls you would have the ingredients for your Christmas card. It would have been 😊 🙌❤️❤️.”

No Photos Of The Girls

Well, the OutDaughtered mom didn’t share a photo on the same day of the quints and Blayke. However, fans know that she posts up about them almost daily. No doubt, as Christmas Day approaches, fans will see plenty of them on Instagram.

What did you think of the Christmas-themed photo that Danielle posted up? Sound off your thoughts in the comments below.