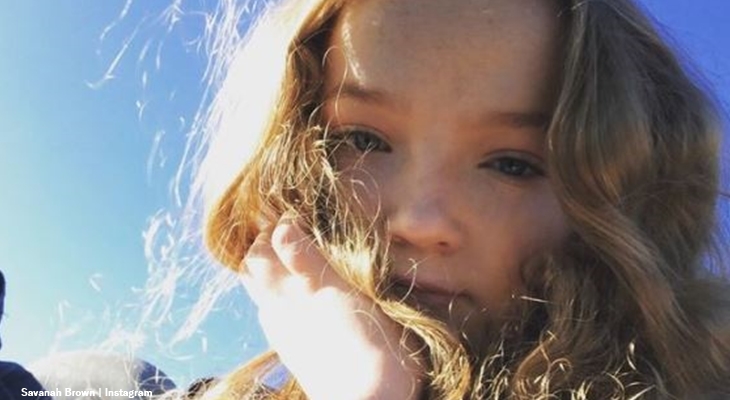 Sister Wives star Savanah Brown is the youngest child of Janelle and Kody. Her older brothers moved out, and her sister Maddie Brown Brush lives in North Carolina. Usually very quiet on Instagram, the teen suddenly started posting more often. However, the last two posts seem to reveal that she feels a bit down. Is the high school student okay?

Savanah only posted up about 10 photos since she opened her account in July 2019. About three years ago, when she was 14, she shared her very first post. Now 16, she turns 17 at the end of this year. However, in 2021, Savanah only shared about four new photos. In fact, her mom shares more about her daughter than she does. In October, Janelle revealed a very sweet photo of her daughter as she attended her first Homecoming.

Sister Wives fans see that photos from Savanah are very rare. Back in April, the retiring girl posted up a photo of herself with her mom. Actually, she’s so quiet, that some fans don’t even recall her at her sister’s wedding, Too old to be a flower girl, she didn’t even feature as a bridesmaid. However, until now, what she did post revealed what seems to be a very sweet girl. But right now, she seems a little bit vulnerable.

All teenagers seem to go through a period in life when they question life, values, and religion. Perhaps Savanah goes through that right now. On the surface of things, she looks fine. However, on November 26, she shared a post on Instagram that seemed cryptic. Hollywood Hiccups reported that she said, “I walk around like everything is fine, but deep down, inside my shoe, my sock is sliding off.” But now, a second cryptic post followed so fans might wonder if she’s okay.

On the last day of November, Sister Wives fans saw that Savanah said, “Human beings are 70% water. So basically, we’re all a bunch of cucumbers with more anxiety.” Well, fans laughed about it. Just like the first cryptic post, some of her siblings liked the post. Of course, it could just be her developing a rather dry sense of humor. But if you read both of them together, do they point to something being wrong?

Sister Wives fans could take both posts together and suspect that something’s up. For example, she said in total, “I walk around like everything is fine, but deep down, inside my shoe, my sock is sliding off…Human beings are 70% water. So basically, we’re all a bunch of cucumbers with more anxiety.”

Is Savanah trying to say that on the surface of things she looks fine, but underneath it all, she feels vulnerable and that life seems fairly pointless? Or is that reading too much into it? What are your thoughts?  Sound off in the comments below.

OutDaughtered: Busby Quints’ Cousin Bronson Has A Birthday – How Old Is He?