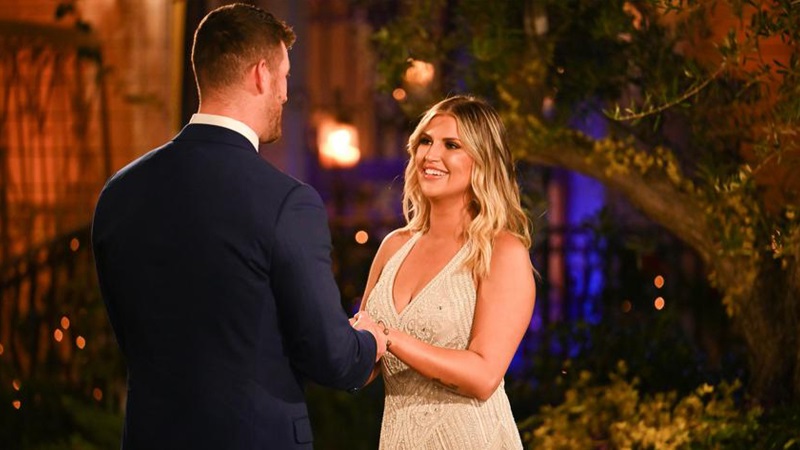 The Bachelor seems to go for people who do well at sport and Clayton Echard follows the same formula. In fact, the host for Season 26 is Jesse Palmer, formerly a quarterback in the NFL. Additionally, last season’s lead, Matt James also played in the NFL for a bit. However, it seems that Clayton Echard also excels in kissing. In the premiere, he kissed a lot. But that doesn’t mean he had any time for Claire’s loose lips.

The Bachelor Premiere Proved That Clayton’s Good At Kissing

Clayton might not be sizzling hot like Hannah Brown’s discarded suitor, Tyler Cameron, but he’s not bad-looking, fans agree. And, he really likes kissing the girls. In the premiere, ABC fans saw him lock lips with just about everyone. In fact, he kissed Eliza long and deep and she seemed just fine with it. But, it seemed that Clare didn’t like that sort of thing very much.

The Bachelor fans saw that Clare mouthed off to the others saying “I hate” Clayton. Additionally, she clearly stated that he made her feel uncomfortable and he seemed overly nice for her taste. Naturally, quick to tell a tale and reduce the competition, word about that soon reached the ears of Clayton

The Bachelor Lead Confronts Clare Of The Loose Lips

Clayton seems unafraid of confronting a bad situation, so he asked Claire about her problem. Well, she denied that she hates him, saying, “I don’t hate you.” Nevertheless, she did say to him that she felt they just “didn’t click.” In response, he walked her out. It certainly looks like there’s no second chance with this ABC star.

The Bachelor fans on Twitter seemed divided in their opinions on Claire. Some of them seemed to like her attitude as she wasn’t about to fawn on him. To them, she seemed real, straightforward, and honest. Meanwhile, others thought she wasted her time even being there.

The Bachelor wanna-be, Claire, might have grabbed only about five seconds of fame, but she won’t be forgotten. Funny memes enshrine her moment of honesty, as you can see below:

Well, Claire was not the only person sent home during the premiere. Daria, the 24-year-old law student from NY didn’t make the cut. Neither did Hailey, Ivana, Jane, and Lindsay D. Others rejected included Rianna, Salley, who literally cried herself out the door over a broken heart, and Samantha. Actually, all of them really seemed very beautiful women. Mara, who leaked about Claire hating Clayton remains in the pool.

Meanwhile, the first impression rose went to Teddi Wright, a nursing virgin who hails from, California.

Be sure to catch up on everything happening with the ABC franchise right now. Come back here often for more The Bachelor Season 26 spoilers, news, and updates.