OutDaughtered spoilers and updates left fans hanging when the season that focused on Danielle Busby’s health ended. In fact, she took a lot of heat from some critics who accused her of drama for no reason. Well, now she revealed an update on her health, and she is really struggling.

OutDaughtered: What Was Wrong With Danielle Busby?

Adam Busby and his wife Danielle appeared at a function where she was a guest speaker. Unfortunately, she ended up at the ER later, after suffering scary and weird sensations in her arms and legs.  Subsequently, it was covered by TLC and fans saw her feeling very unwell and crying with fear. The show revealed that doctors suspected she had a heart problem. Then they moved on to explore some suspected nerve issues.

When the season ended, OutDaughtered fans slammed Danielle as she went to visit friends for a restful break. Additionally, when she and Adam took a break, more people slammed her. Ugly accusations of faking it for the cameras arose. So, the mom of Blayke and the quints went very quiet. Now, she finally broke her silence on her health problems.

This week, Danielle took to her Instagram Stories and shared a long update. Actually, she seems to be in a bad place and she struggles a lot. 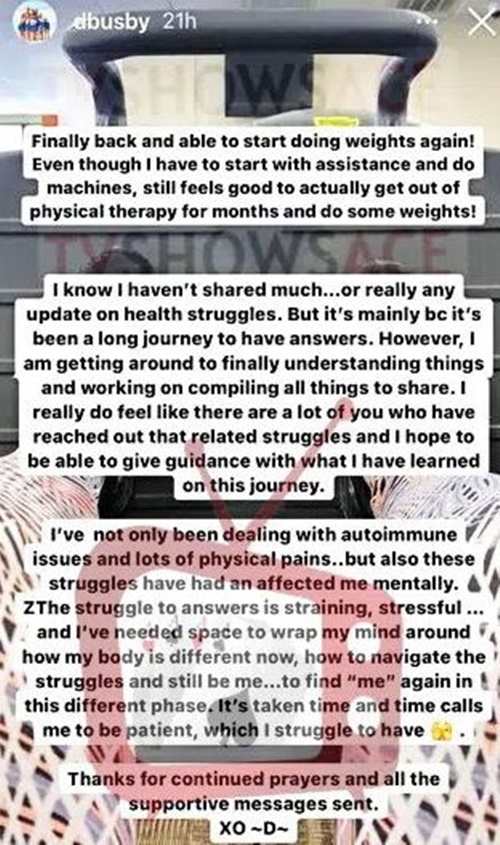 As you can see in the post above, the OutDaughtered mom isn’t in a great place with her mental health either. A lot of her frustration seems to come because she suffers from an autoimmune problem and she can’t get used to the idea of not being fully in control of her life.

Is The TLC Show Canceled Because Of Ill-health?

Fans heard rumors that the OutDaughtered show might not return. Actually, it came when Adam talked about how they needed to make a video to address the lack of a new season. In that comment on an Instagram post, he mentioned making the “best” decisions for their family. If Danielle is still so sick, perhaps they decided to take a hiatus.

Whatever the reason is, fans can probably rest assured that the two parents would have thought long and hard if they turned down another season of the show. Hopefully, Danielle manages to turn her health problems and around and get much better.