Chrisley Knows Best stars Todd and Julie returned to their Chrisley Confessions podcast and they did the usual Q&A from callers. Previously, the family had talked there as well. Anyway, June 17 was the second episode since their conviction for fraud and tax evasion. During the podcast, the worrying news arrived that Nanny Faye, beloved by fans, fights bladder cancer.

Many USA Network fans support and love the family, One fan who called in, prayed for Todd, Julie, and the rest of the family. That’s when the news arrived that Todd’s mom, Nanny Faye has cancer. Actually, fans worry about her because she’s elderly and must be devastated that her son could end up in federal prison. 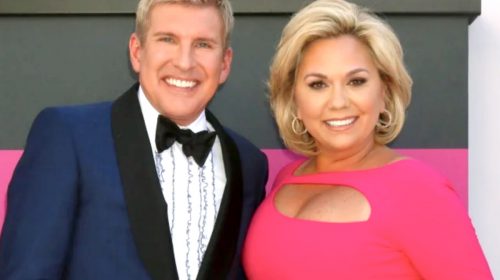 The Chrisley Knows Best stars felt very grateful for the beautiful message. Todd then said that it’s been a very difficult time. In fact, he mentioned that since fall last year, his mom has been fighting cancer. However, he also said that shed “wanted it to be kept private.” So, that is why they didn’t talk about it openly. Actually, in the last few months, rumors about that have run around social media.

Chrisley Knows Best – Nanny Faye Is Treated For Her Cancer

Todd told his listeners that Nany Faye’s cancer emerged during their court case. So, as he likes fans to hear things directly from him, he speaks out now. After talking about the “struggle” they go through, he added, “my mother was diagnosed with bladder cancer.” Additionally, he confirmed that she gets “treatment weekly.”

The Chrisley Knows Best stars confirmed that the issue arose last fall. On top of that big concern, Todd asked the paparazzi to please leave his mom alone. Plus, he wants them to “respect” that she’s “77 years old.” Certainly, it sounds like poor Nanny Faye goes through a terrible time.

What Will Happen With The Podcast?

The Chrisley Knows Best stars are very popular on their podcast. However, news emerged that their contract contained a clause that if they end up in prison, it would end. Those who want to stay in touch with the family and Nanny Faye will be able to listen to Chase and Savannah. In the meantime, Todd promised they will personally continue it for “as long” as they can.

From the entire tone of the podcast, it seems that the reality of being separated from their family sits uppermost in their minds. However, they hold onto their faith. Talking about difficult times and loss, Todd mentioned that everyone goes through it at some stage in their lives. But, the best thing they can do is trust that God is in control.