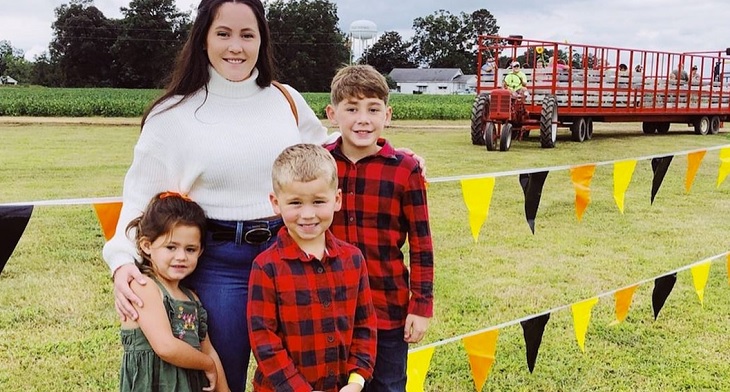 Teen Mom alum Jenelle Evans ended up bashed for bad parenting so many times that it’s probably impossible to count them. However, when she caused a stir on social media this weekend, some MTV fans pushed back. Mixed opinions came after she shared photos of a trip to the beach with the kids.

Many fans of the former MTV star think that slamming her is just something trolls do to amuse themselves. Of course, shocked reactions about her poor parenting gets others trying to outdo each other. A recent example came when she and David Eason took a trip down memory lane. Climbing the  Beacon’s Trail with the kids, they set off for the spot where David proposed to her.

Teen Mom fans scoured closely and decided the wind might push the kids over the cliff. Back in March, the MTV alum defended herself after critics saw something about Ensley. Clearly, critics felt the fact that she rode a cycle on the lawn at home was extremely dangerous. After all, she didn’t wear a helmet. So, Jenelle called the opinions “BS,” and noted she was “supervised at all times.”

When David’s wife took to her Instagram Stories and shared about the kids at the beach, critics felt alarmed. After all, the kids were in the water. With the shot taken from the car, people thought a massive wave might drag the kids out to sea. Then, a  terrible tragedy would finally justify all the parenting slaps over the years.

A Teen Mom follower wondered about where David was. Well, he could have been almost anywhere. out of sight of the narrow angled photo. Redditors debated the photo and the possible danger the kids were in. Both sides had some legitimate opinions. However, unless people were actually there, it’s always hard to link the actual context.

Some Teen Mom fans thought that Jenelle Evans did nothing wrong. One of them said, “I’m going to get downvoted for this, but I live near the ocean, and yes it’s kindda normal. I don’t agree with Jenelle but she looks near to her kids.”

Another one opined, “I live here in the same county as Janelle. This is no different than it is to be in your car in the driveway while kids play in the yard. Didn’t y’all used to ride your bikes around the neighborhood as kids?”

On the other hand, critics expressed a lot of concern. One commenter said, “Hell no. If my kids are in (sic) the beach in (sic) right by them. A rip current or big wave is all it takes to lose sight of them.”

More comments against Jenelle arrived like this one: “I’d be going in after kids who *aren’t* mine if I saw this. The former lifeguard in me wouldn’t be able to let it go. This is just SO dangerous.”

What are your thoughts about Jenelle watching the kids from a car parked right on the beach? Do you think it’s perfectly fine? Or, do you think it’s an example of bad parenting? Sound off in the comments below.