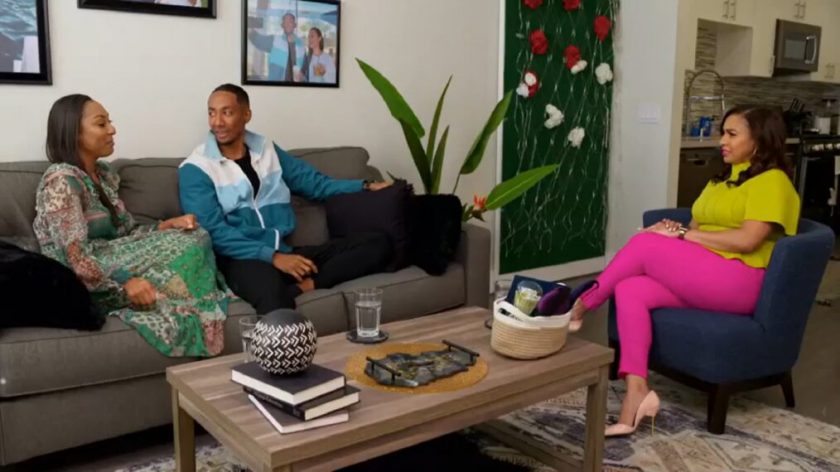 Before Dr. Pia even arrives at their apartment the two are already arguing. Alexis wants to go out on the weekend and Justin is against it, he says she went out with her friends last weekend. Her reply is that he should be happy that she comes home from work every night and doesn’t go out. Dr. Pia arrives and Justin says he is glad to see her and she says she heard a lot of commotion outside the door. Both say all is good, they just have high-pitched voices. Justin says he has an issue that Alexis goes to the club every weekend. Alexis says that sounds great from his perspective, but she has a large group of friends, and she likes to go out once a week for an hour or two. Dr. Pia asks her why she has this desire to go out with her friends. She says there has to be a balance, he was a stranger two months ago. Alexis says she never thought it was going to be her husband’s way or the highway. She finds him controlling and manipulative. If this is a deal breaker, she says she is sorry, she cannot commit to being with someone 24/7. Dr. Pia says it is not 24/7, he just wants her home on the weekends. The two start arguing back and forth, and Dr. Pia has to break it up. Dr. Pia asks Alexis if she is ready to be married to Justin and Alexis says outright, “I don’t think so.” Justin takes his ring off.

Morgan and Binh are sitting on their couch, it has been a couple of days since Binh has seen her. Dr. Pia arrives and sits down with the two. Morgan says things are disappointing, she was really hopeful coming into this, and she really wanted a partner, and she starts crying. She says she is in defense mode because Binh attacked her character, behind her back primarily. Dr. Pia finds that Morgan is saying that Binh is vindictive and malicious. She asks him if he is intimidated by Morgan, and he says a conversation with her is hard. He prefers Morgan to talk in the same tone as him and talk it out. He says he never told her he didn’t like her tone, instead he runs away. Dr. Pia asks Binh why he doesn’t fight. Morgan responds and says she hasn’t gotten a genuine apology. He says he has said he is sorry, he doesn’t know how to make her believe he is sorry. Binh says he feels guilt.

Morgan says she would be able to accept a full apology, it would show her that he is owning up to what he did. She needs to feel his emotions from him. Dr. Pia tells them that trust is not going to happen overnight, it is going to give time. But, they should have the same tone when they talk to each other. He says if they don’t stay together it will be devastating.