Married at First Sight season 16 spoilers and updates tease that now that all the 10 singles have been matched and married, the drama begins. The couples are Christopher Thielk and Nicole Lilienthal, Airris Williams and Jasmine Secrest, Clint Webb and Gina Micheletti, Mack Gilbert and Domynique Kloss, Shaquille Dillon and Kirsten Grimes.

MAFS fans were quick to catch in the most recent episode when Domynique was having a chat with her extended family and she told them that because she didn’t choose men well on her own, she decided to seek the help of the professionals at Married At First Sight because of their “high success rate.” Domynique has definitely left many of us wondering where she got her statistics from, the last three seasons of MAFS have been a disaster. Now, had someone other than MAFS arranged her marriage then she may have fallen under the national statistics of only 4% of arranged marriages ending in divorce.

Sadly, this couple doesn’t have much of a chance and Domynique is going to soon see how successful her own match is. In the promos for this season, we see Domynique walking out of the apartment she shares with Mack, and in another scene, Mack tells Clint that his wife is sexy. There are rumors that Mack and Domynique don’t last long and their breakup is going to be epic. The stats are going to drop again.

Kirsten is beautiful and used to getting lots of compliments on her looks. So, when she walked down the aisle and met her new husband-to-be and he just stood there smiling at her, Kirsten said, “what? You look like you want to say something.” He didn’t know what to say, he was obviously under her spell and then said, ”God knew what he was doing when he made you.” That was good, Kirsten was satisfied and thanked him for the compliment that she was expecting.

Kirsten made it known to the experts that she wanted someone like her, attractive, educated, and ambitious. Shaq was immediately smitten with his new wife and sadly, unbeknownst to him, there are already two strikes against him; his being bald and almost a year younger than she is. She picked out his flaws “according to her” immediately, yet Shaq hasn’t said a negative thing about her. 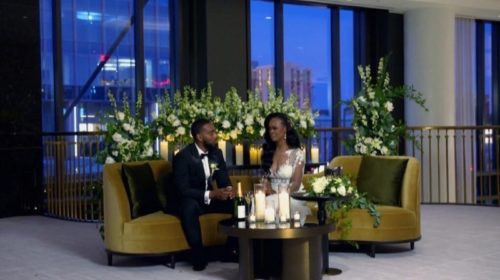 Kirsten had this ideal man in her head and didn’t get it. Hopefully, she really does put the effort into this marriage and just doesn’t bide her time to decision day, then breaks Shaq’s heart.